Latest Victim of Hate Jihad in Kerala; Succumbs to Death 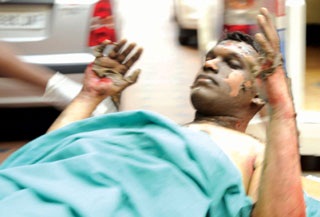 Jithu is the third victim of jihadi terrorism in Kerala in short span of time, followed by Vishal at Chengannur and Sachin at Kannur.

Jithu Mohan is a degree student of SD College. On coming to know about the relationship, the girl’s relatives opposed it and smuggled her to another relative’s house. Following this Jithu gave a habeas corpus in the High Court, following which the girl was produced before court. She was, however, allowed to leave the place with her relatives. Meanwhile Jithu’s friends said that the youth was forcibly taken to the house of Shabana’s sister who resides in Kodungallur by Shabana’s brother in law. Also in league with Shabana’s relative is a Police Officer of AR Camp, Wahab. The incident of setting Jithu afire took place in Wahab’s house.

Hindu organisations have called for Hartal tomorrow in Kodungallur and Mavellikara demanding the arrest of Police officer Wahab and his Jihadi aides.
Tweet