Within days after dates for Gujarat elections have been declared , terror elements in Gujarat started their terror agenda to incite riots once again in Gujarat.

A Rally to condemn so called Anti Islam movie produced by someone somewhere in the world was the reason for Hundreds of Jihadis to pour into the streets of Ahemedabad.

A City wide bandh was called on Wednesday by a woman Zarinakhan Pathan. The bandh call were rejected by Muslim leaders and organisations. Mufti Shabbir Ahmed of Jama Masjid, members of organizations like Jamat-e-Islami, Jamiet-e-Ulaima Hind and Muslim legislators and municipal councilors had appealed that the community not follow the call of bandh. 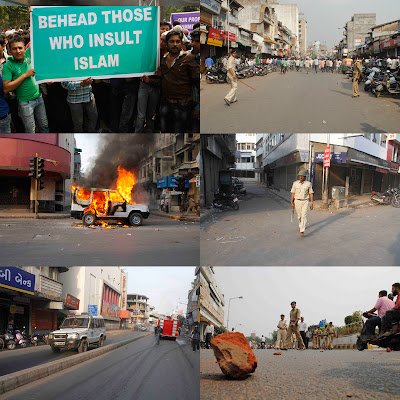 At first Jihadi elements clashed with Jumma Masjid Imam’s followers and later they took into the streets of Ahmedabad. Jihadis torched a Police station. Jihadis locked women officers inside police station near Tran Darwaja and set the police station to fire. They also burnt the Khas bazar chowki. Many vehicles parked outside police post were also torched.