RAJIV DIXIT OF AZADI BACHAO ANDOLAN IS NO MORE 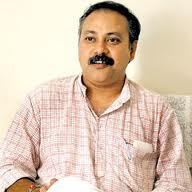 According to his friends in Mysore, Dixit collapsed while delivering a lecture in Bhilai at around 6.30 last evening following cardiac arrest and breathed his last around midnight.

He was recently associated with Yoga Guru Baba Ramdev as Secretary of Bharat Swabhiman Trust in Haridwar.

Incidentally, tomorrow was his birthday and his friends were making preparations to celebrate the occasion.

He leaves behind his father, mother and a brother who live in Wardha, Maharashtra.

He was planning to contest the forthcoming Lok Sabha polls.

Rajiv Dixit was a true Indian revolutionary and patriot. Dixit, who was struggling for past 20 years against multinational companies, was born in Allahabad (UP) and belongs to a freedom fighters' family. He loved freedom fighters like Bhagat Singh, Chandrashekar Azad, Subash Chandra Bose, Gandhi etc.

He was also a scientist and very few people know that he worked with Dr. A.P.J. Abdul Kalam. He also worked in France as telecommunication scientist.

He started 'Swadeshi,' 'Protect Your Freedom' and 'Use Indian Product' movements.