No comments
Hindu Rashtra - Eternal and Perennial
And Hindu Rashtra is the finest blossoming of this spiritual consciousness. We see it shining in its pristine glory on the, very fire page of history as a fully developed nation. The great secularist of recent times, Pandit Jawaharlal Nehru, had noted with great pride that "One feels curious and wonder-struck on seeing the vast and unbroken stream of Indian civilization and culture from the dawn of our history to modern times." While in the Vedic period the feeling of intense intimacy towards the motherland is expressed in the words "Mata bhoomih putroham prithivyah" -"Aye, we are children of this mother earth,"in the Pauranic period it takes the form of : 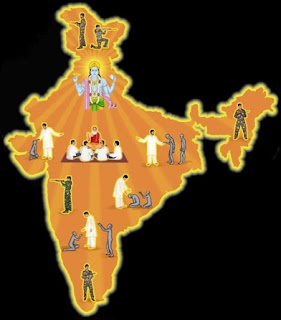 Uttaram yat samudrasya, Himadreschaiva dakshinam !
Varsham tad Bharatam nama Bharati yatra santatih !!
(Bharat is the name of country situated to the north of the sea
and south of the Himalayas and its progeny is known as Bharati.)

The same sentiment was expressed in the middle ages in the following sloka of Barhaspatya shastra :

This land created by the gods and extending from the Himalayas to Indu Sarovar [i.e., the Indian Ocean], is known as Hindusthan.)

It is to be noted that this sloka also points to the possible formation of the word Hindu, as a beautiful synthesis of Hi of the Himalayas and Indu of the Indusarovar. There is also the belief that it is a variation of Sindhuoriginally used to denote the people living in the region around the river Sindhu (Indus) but later came to be applied for the people of the entire country. There is no doubt that in both the cases, the word Hindu has been used for the offspring of this land. The following Vedic sloka has sublimated this tradition of intense attachment to the motherland by depicting it (motherland) as the Rashtradevata, the divine manifestation of nationhood itself

(The sages carried out austere penances for the welfare of mankind; and out of that (penance) was born the nation endowed with strength and prowess. Therefore let us worship this Rashtradevata. (Atharva-Veda)