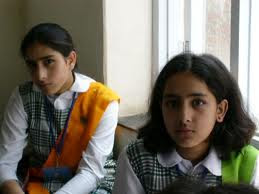 As India observes Teachers Day this weekend, it is time to spare a thought for the Kashmiri students who are not in school.

Children in Srinagar, the winter capital of the restive state of Jammu and Kashmir, have been sitting at home for the past two-and-a-half months, unable to attend classes due to a cycle of shutdown calls given by the separatists and curfew orders imposed by the administration.

The young children are witnessing rage on the streets and frustration at home.Some are joining the protests, egged on by peers and adults who urge them to be part of the struggle for 'azadi' (freedom), telling them that education can wait for now.

Others resist the pull and pressure and stay safe at home, but with nothing to do and nowhere to go.

Teachers have told them to study at home, as the exams will be held on schedule at the end of the semester, regardless of whether classes are held or not.

Some schools have uploaded tutorials on the web and the students are trying to study the material on their own. But, not everybody has access to the Internet in the nine districts of Kashmir.

The Delhi Public School of Srinagar has flown over a hundred children to one of their Delhi branches to complete their summer semester. The school is tightlipped about the identity of the children in order to protect them. Off the record, we learn that their parents in the valley might face harassment from separatists for having evacuated their children.

Mohammad Irfan of Srinagar University says that the first term exams are to be held in a month's time and not a single day of classes have been held.

He says: "How are we supposed to cope with this? Young children are sitting at home and their future is at stake. I appeal to the leaders and the government, please spare a thought to the children of poor and middle class families who cannot afford to leave this city and study elsewhere."

Adds Mohammad Aslam: "The poor have nowhere to go. Week after week we live in hope that violence will end and normalcy will resume. Even during the Ramadan month there has been no respite. How long can the children stay away from schools? What future do I have, just waiting?"

Some believe separatist leaders like Dukhtaran-e-Millat chief Asiya Andrabi and Hurriyat leaders like Syed Ali Shah Geelani and Masrat Alam, who tell them that they are the promised generation, who will deliver to the Kashmiris, freedom from Indian rule; a promise that had been made twenty years ago, which has also led nowhere.

Masrat Alam, who is a separatist living in hiding, said in a statement to the local KNS: "To get education is everybody's wish. But what is the importance of the education in a place where there is a dark future, and, where, students like Tufail Matto are being killed."

He added "even from 1990 to 1995, when the Kashmir agitation was at its peak, still a large number of youth became doctors and engineers....that is why, we have full faith in students and they will get more marks than what they used to during normal times. We are not living in palaces, but among common people, that is why, we say that the masses are not tired and that they are connected with the ongoing movement from the grassroots level."

At the alter of his personal ambition of succeeding Syed Ali Shah Geelani of the Hurriyat, Alam will lay to rest many young futures without any sense of guilt. Why guilt, there is euphoria in the speeches that are made in darkened rooms and uploaded onto you tube.

And then, there Asiya Andrabi, chairman of the hardline 'Dukhtarane Millat', who had to face embarrassment when news broke that her son, Mohammad bin Qasim, has applied to study in Malaysia, while she was advocating that children should boycott education and join street protests.

According to her, it is the security forces that target children. She refuses to accept that protesters carrying children on their shoulders while surrounding police stations to torch them, are endangering the lives of children.

She will not budge from her stand that pre-teens carrying placards that call for violence against state, is not the right thing to do.

Children who barely understand what 'azadi' means are being yanked out of homes and brought into the forefront of demonstrations.

But Asiya says, "The unabated killings of Kashmiris was part of a larger conspiracy to quell the ongoing movement. We will not retreat till we achieve freedom. People should be ready for a longer agitation for attaining their basic rights."

She also said, "the biggest tribute to the martyrs would be to carry forward the ongoing movement to its logical conclusion," by which she means secession from India.

Castigating those who criticize the strikes on the ground that education of children has suffered, Asiya says "When our teenagers and youth are being martyred with impunity by troops and cops, how can we carry on our business activities?

Draksha Andrabi, a mother and resident of Srinagar city, says "I would like to appreciate Asiya Andrabi 's decision (of wanting to send her son overseas to study). She has a right to educate her ward wherever she pleases. However, she should also look upon the agony of Kashmiri students. Since last June, schools and colleges of Kashmir have been closed.Who will send them to Malaysia or other parts of Kashmir for better education?"

Hurriyat leader Syed Ali Shah Geelani's family members are employed in government offices or are studying outside Srinagar. Mia Qayoom, also a Hurriyat leader, has children studying in a medical school in Bihar and in a Jammu school.

The separatist leaders' children will receive their education outside of Srinagar and will most likely join politics.

Dynastic politics is commonplace in Kashmir. While some come into power through the electoral process like Omar Abdullah, a third generation politician and current Chief Minister and Mehbooba Mufti, a second generation politician and currently a Member of Parliament, there are others who are waiting in the wings to join their relatives who are separatists leaders in the current violent agitation.

Mirza Mahboob Beg, a Member of Parliament from Anantnag in Kashmir, says "the rich can send their children to Pune and elsewhere. They will get quality education. But what of the poor? How can we look away and forsake the future of hundreds of thousands of children."

In the Kashmir region, there are almost a million students in primary, secondary and high schools now sitting at home. And, add to that about 30,000, who are enrolled in universities and technical institutes.

Besides being deprived of education, they are living under high stress conditions. They have to battle with pressure to join the violent agitation or be ridiculed. They watch funerals and women wailing over lost kith and kin almost on a daily basis.

Sounds of gunfire and getting caught in tear gas protests are commonplace. Being roughed up by policemen, asked to show identity papers and subjected to rude and intrusive questioning, is something all Kashmiri youth have faced.

They also face stigma, discrimination and abandonment. Nobody has the time or the resources to give them counseling that they so badly need. They long for the day when they can get on with their lives, go back to school.

Chief Minister Omar Abdullah told this correspondent in Leh "If only the separatist leaders could spare schools and colleges and medical institutes from their agitations, things could start improving. Parents should take the blame for letting their children out into the streets and putting them in harm's way."

Blame. Everybody blames everybody else. It's the children who don't want to blame anybody. They just want to be with their buddies in their classrooms.