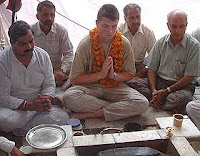 Unsal Ozenen (25), a national of Turkey adopted Hindu religion in the presence of Hindu leaders including the Vishwa Hindu Parishad, the Bajrang Dal and the Arya Samaj. He changed his name to Shankar Natrajan Arya.

In his affidavit he said that, “I am Muslim by faith and I am changing my religion with my consent without any pressure, undue influence or threat. I adopt this religion after inspiring from holy books of Hindus as well as reading from the Internet regarding qualities and basics of Hindu religion.” He had read ‘Dancing with Shiva’ written by Subramanyam Swami, ‘Bhagwat Gita’ and ‘Chandi Path’ written by Satyanand Saraswati besides ‘Loving Ganesha’, ‘Devi Gita’.

Mr Unsal said his family members did not object.

Answering queries he said the fundamentalists had distorted the face of Islamd which affected this (Islam) religion. He said terrorism had no place in Islam.