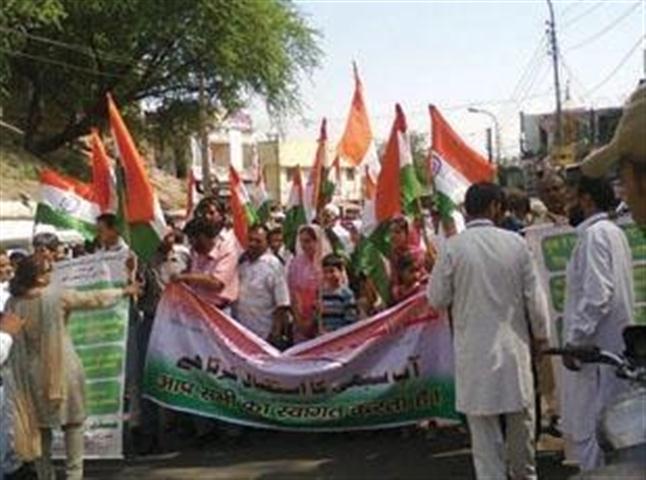 The people of Jammu awoke to a new dawn on May 7th. The sweet sounds of ‘Vande Mataram’ and ‘Bharat Mata ki Jai’ that reverberated through the entire town of Jammu came as a pleasant surprise for them. The slogans also sounded a warning to those elements in the Kashmir Valley who nursed the dream of ‘Azad Kashmir’. The people of Jammu were all smiles for they have not seen even in their dreams in the last 67 years that Muslims would sing ‘Vande Mataram’ and chant ‘Bharat Mata ki Jai’ and demand in once voice abrogation of Article 370! It was next to impossible for them!!

But this impossible was made possible. And that too by the Muslims who loved Mother India as their beloved ‘Madar-e-Vatan’ as any other devout Hindu.

The Muslim Rashtriya Manch (MRM) which has been working among the Indian Muslims rekindling the flames of love and devotion amongst them for the motherland had made this seemingly difficult and impossible task possible on the soil of Jammu. The two-day national seminar organized by MRM on “Hum Hindustani Jammu-Kashmir Hindustan Ka” was a befitting reply to those separatist and militant elements that had been day-dreaming about segregating Kashmir from India since the days of independence. 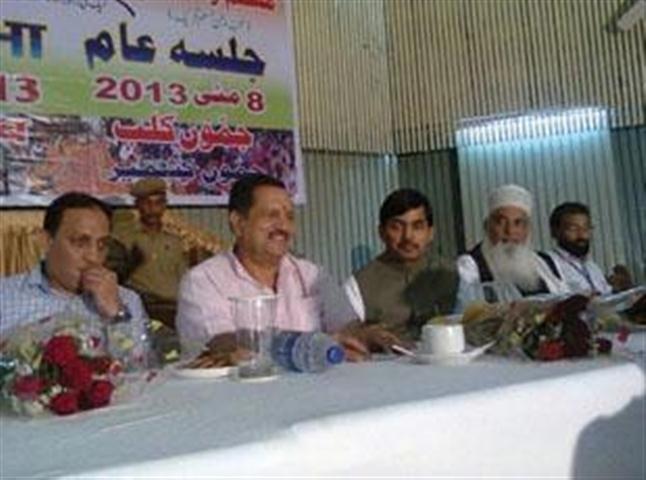 The seminar that began on May 7th at the Agrawal Dharmasabha auditorium was inaugurated in presence of stalwarts like Mohd Afzal, National Convener of MRM, BJP National Organizing Secretary Ram Lal, Indresh Kumar, Patron of the MRM and senior RSS functionary, Col. Khalid Hussein, Mohd Salim Asharfi, Chairman Chhattisgarh State Waqf Board, and others. The seminar was attended by over 200 delegates coming from all over the country including over 100 from the state of Jammu and Kashmir.

Addressing the inaugural session Mohd Afzal highlighted the activities and programs of MRM vis-à-vis concern for J & K. he vividly described how the MRM activists under his leadership had participated in the Amarnath Shrine Board agitation, how they unfurled the tricolor at Lal Chowk in Shrinagar braving the terrorists’ bullets and unfriendly administration, how the MRM rejected the Dilip Padgaonkar Committee report on J & K and how the MRMhad organized a massive dharna demonstration at Jantar-Mantar in New Delhi on December 18, 2011. He also highlighted the response elucidated by the MRM signature campaign from the Muslims of India over J & K. He categorically reaffirmed that the MRM would not allow further vivisection of Mother India in the name of religion to a thundering applause.

Col Khalid Hussein underlined the need for spreading education among the Muslim masses. He said that Muslims should also study Geeta and Vedas translate these treasures in Urdu so that they can be within the reach of a common Musalman, he said. This understanding of each other’s religion would remove most of the misgivings, he said.

Mohd Salim Asharfi said that MRM has been successful in setting in atmosphere of communal harmony, goodwill and brotherhood and mutual understanding. A very positive message is being disseminated to the people of India through MRM, he said.

BJP Organizing Secretary Ram Lal said that Jammu-Kashmir has been the region of Durgahs and temples. Blaming the British to wedge a divide between the Muslims and Hindus he said that after independence successive Congress Governments also followed the same policy for their political ambitions. He opposed the Article 370 which was discriminatory in nature and discriminated against the Muslims of Jammu and those of Kashmir regions.

Indresh Kumar said that MRM was a movement of spreading love for the country and people. We believed that the Muslims in India shared the same culture, same land and same ancestors with their Hindu brethren. Islam represents peace and progress while Musalman is synonymous to brotherhood and welfare. This has been the tradition of Hindustan. He said that the Kashmir from where the Prophet used to get a cool breeze of peace has now become hotbed of insurgency, separatism and militancy. The MRM committed itself to end all these woes of Kashmir and to usher in a new era of peace, progress and harmony.

In the subsequent sessions the speakers including Chaudhary Lal Hussein of Jammu, Mohd. Iqbal Bhatt of Doda, Bashir Ahmed of Kashmir, Chaudhary Manzoor Hussein, Mohd Faiz Khan,Mohd Siddique of Anantnag, Munnawar Chaudhary of Jaipur, Gulam Mohd of Jammu, Ishrat Khatun from Bihar, Shahnaz Afzal from Delhi and others demanded abrogation of Article 370 and denounced separatism and militancy in the strongest words.

Shahnawaz Hussein said that Article 370 was the root cause of all problems in J & K. He lauded the MRM activists for their commitment to get this discriminatory article deleted from the Constitution. He said that this Article did not give anything to the people and state but snatched away every thing from its people.

The BJP leader said “the Indian Muslims have been fortunate enough to get a better nation like ours to live and a better neighbor like Hindus”. No Muslims in the world have this privilege. Lambasting the ruling class in J & K Hussein said that only 100-odd families were benefited by Article 370.

Indresh Kumar in his valedictory address made a strong case for abrogation of Article 370 stating that it has created disparity in the society and division in the country. He disputed the claim of the Congress that it was instrumental in gaining freedom for the nation. The nation got freedom because of the sacrifice made by Bhagat Singh, Ashfaq Ullah, Chandra sekhar Azad, Subhash Chandra Bose and many others, he said.

MRM National Convener Mohd Afzal blamed Pt, Jawaharlal Nehru for the ills of Kashmir today. He said Muslims and Hindus were not responsible for partition of India but leaders like Pt. Nehru and Mohd Ali Jinnah should be blamed for this tragedy which saw the inhuman massacre of 0ver 10 lakh Hindus, Sikhs and Muslims. He squarely blamed Nehru for complicating the issue of J & K.

Out rightly rejecting the report and recommendations of Dilip Padgaonkar Committee Afzal said that the MRM had collected over 8 lakh signatures of Muslims from all over India in support of their demand for abrogation of Article 370. This has happened for the first time in the history of Independent India, he said.