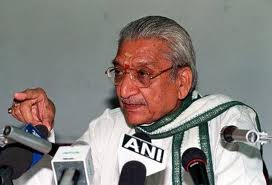 “The word is in the air for some months now that Sri Mulayam Singh Yadav is wanting to acquire a land bang next to the 70-acre acquired land around Sri Rama Janma Bhumi. Sri Mulayam Singh Yadav and Smt. Sonia Gandhi have ganged up towards this end. For this a retired Judge of the Allahabad High Court has been engaged for about two years now to make efforts to evolve a so-called consensus,” said the VHP Patron Sri Ashok Singhal in a media briefing.

He said: “Regarding the Sri Rama Janma Bhumi it is the view of all the Sants of the country that on the acquired 70-acre land only a huge temple to Sri Ram Lala would be built and the construction of no new mosque would take place within the scriptural and cultural rim and perimeter of Ayodhya. From the labors being put in by the Hon’ble Judge it seems that Sri Mulayam Singh Yadav wants to build a mosque and an Islamic Cultural Centre on the said plot of land (where an Ara/saw machine stands) adjoining the 70-acre acquired land of the Central Government. The Islamic forces are compelling him to do so.”

“That is why the word is in the air that the acquiring job the SP government of U.P. will do and the UPA Government led by the Sonia-led Congress would siphon off funds for the plan. Regarding Sri Rama Janma Bhumi if a reckless decision is taken that would lead to grave consequences,” warned Sri Singhal.

“The pressure of Jihadi forces in entire Uttar Pradesh is getting unbearable for the Hindu society. Incidents of pulling up and removal of Murtis (images of divinities) from temples or their amputation are mounting in the State. The ripping up (burglary) of the image of Maa Devkaali recently in Ayodhya is a burning example. Especially the timing of the eve of the Navaratras chosen to break or sever the images to practice iconoclasm is designed to compellingly provoke the society. The Akhilesh Yadav led SP Government has proved to be totally incapable of preventing such incidents,” Sri Singhal alleged.
Tweet