FIR's against Zakir Naik for attempt to create communal riots 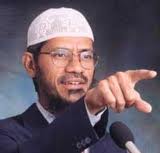 A complaint has been lodged by office bearers of Shiv Sena, BJP, Ganesha Festival Mandals and Hindu Janajagruti Samiti (HJS) with various Police Stations all over the State demanding that ‘when Ganesha Festival is being celebrated in peaceful atmosphere, Dr. Zakir Naik is trying to disturb Hindu-Muslim harmony by giving such challenge; therefore, case should be immediately filed against him’.