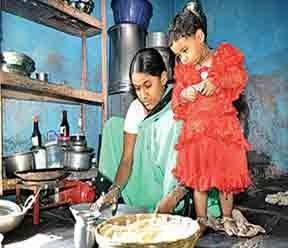 A family of devadasis that is trying to lead a life of dignity making quilts and papad; an overzealous, Christian anti-trafficking NGO desperate to justify its funding with some ‘results’; and a bunch of local cops in awe of white skin.
Put them all together and you have the absurd tragedy of a two-year-old baby brutally torn away from her mother and kept in a children’s remand home for nine days, probably traumatising the infant for life, and leaving the mother in shock.

On November 4, 2011, in the Gokulnagar neighbourhood of Sangli town, about 350km south of Mumbai, a group of policemen accompanied by an identified ‘gora’ barged into the home of Kasturi Talagedi, 59, and took away her two-year-old granddaughter, Gaurauva, and her 21-year-old speech-impaired niece, Savitri.

They had already made up their minds that Savitri was a sex worker and that Gaurauva was her illegitimate daughter. This was their idea of an anti-trafficking operation. By the time Gaurauva’s mother and Kasturi’s daughter, Geeta, 26, came to know what was going on, it was too late — her baby was gone.

Kasturi, who lives next door to Geeta. recounts the nightmare. “My granddaughter Gaurauva was playing with my niece Savitri when the police came with a gora. He pointed at my niece, and without asking me anything, the police dragged her out of the house. They said she was a minor and I’d forced her into prostitution.” Kasturi’s pleas that her niece was 21 fell on deaf ears. “They took the baby too, insisting she was Savitri’s daughter.”

While a speech-impaired Savitri could only whimper, Geeta, who heard the commotion, rushed out of her house begging for her baby. “Seeing a crowd gather, they let me into the police vehicle, but I was pushed out midway and they sped off,” says Geeta.

Kasturi and and Geeta then approached Sangram, an NGO which works with vulnerable women in the area of HIV/AIDS prevention/treatment. Sangram’s Meena Seshu speaks bitterly about the insensitivity of the police.

“They got a sign language expert from Miraj town, who insisted that Gaurauva was Savitri’s daughter. The police kept parroting this, though a medical examination established that Savitri had never ever conceived,” she says.

Only when they took the matter to the local court did the police relent, nine days later. “Because of all this, the baby was deprived of mother’s milk. I could feel her ribs when they released her,” says Geeta.

When contacted by DNA, Sangli Additional Superintendent of Police Digambar Pradhan, who conducted the raid, admitted that an American working with an international anti-trafficking group had accompanied the police team, but refused to divulge the name of either the American or his organisation. “It is our duty to respond to any complaint of trafficking in minors and take action,” he said.

But how can the police just take away any random woman’s baby based on some NGO’s complaint, without any evidence of trafficking?

Admitting to the goof-up, Pradhan says, “We were very vigilant because we didn’t want the child to be with the wrong person.”

Seshu points out that many faith-based American organisations that are flush with donations obtained in the name of anti-trafficking work are sending workers to interior towns like Sangli. “These NGOs and their volunteers suffer from ‘targetitis’ and get ultra-aggressive in their approach,” she says.

According to Seshu, the number of such foreigners in Sangli (Maharashtra home minister RR Patil’s home district) has risen sharply in the last five years. “I’d like to know why they’re here. Will I be allowed to do anything similar in the US when I’m there on a tourist visa?” she asks. “Instead of asking these questions, our police only seem too keen to hobnob with the goras.”